WORKS > Treasures from The Metropolitan Museum of Art 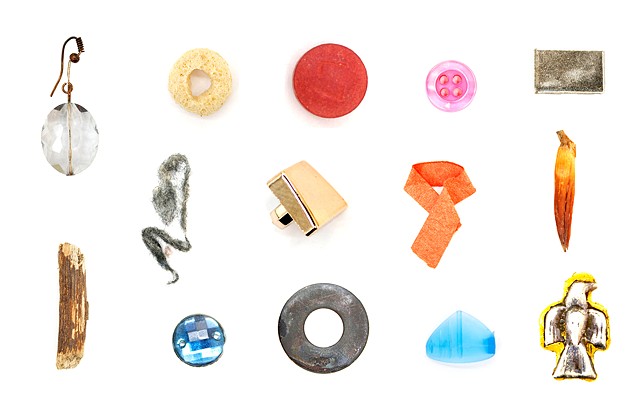 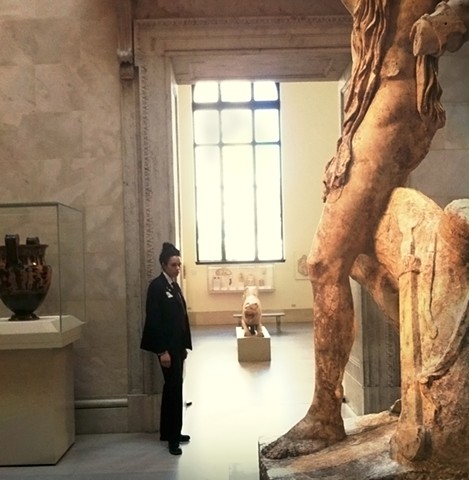 Treasures from The Metropolitan Museum of Art The Metropolitan Museum of Art was founded in 1870 in New York, NY. It’s the largest art museum in the United States with the permanent collection containing more than two million works from around the world. Throughout the Met’s 144 years of existence it’s been the museum guard who’s been entrusted with the extensive responsibility of sustaining safety for the people, galleries and the art. Guards spend pronounced time upon the museum floors during which relations are formed interweaving through people, galleries and artworks leading to forms of conscious rising. Guards experience the complex duality of balancing the circumstance of being placed on the bottom of the wage and social spectrum within the institutional museum structure while given the fundamental authority of guardians.

The guards’ position at the Met requires one to be quietly aware at all times, this requires continued physical and mental strength. A few of the duties include reporting to one’s assigned section and post, standing, surveying, directing and informing visitors and staff, communicating with the dispatch office, and memorizing the museum’s layout, specific artworks, events and shows. Despite the numerous appointed tasks, the job functions largely in states of monotony.

In most cases guards spend the majority of the day standing on their feet, in their own minds without interruption; a type of cerebral numbing zone. Many counteract this zone through sketching or writing on small pads of paper, completing crossword puzzles, and even learning new languages through the use of small flashcards hidden in their hands. There are also those who seek to memorize every art piece and detail found within specific galleries.

Some guards speed up the presence of time by activating the rule of “no backpacks on backs” as a strict mission, keeping their eyes and bodies alert and approach every visitor breaking the rule. Yet, there are others that let this rule slide and tend to focus their eyes on the figures and faces of the visitors, and either discuss their thoughts with team members or keep their views to themselves. And there are those who pass the time keeping their spirits high by singing songs within.

Throughout my duration of working as a security guard at the Met, I too attempted the majority of these strategies. Yet, most days the numbing zone took full effect. It was during this time that I started to observe not only the people and art, but the small lost remnants of being left behind on the gallery floors. While on duty I began to take on the role of an archaeologist, this duty gave me more to contemplate.

Towards the end of my first month on the job I saw the first relic; it was located on the floor in the middle of gallery 169 - Art of the Later Roman Empire: Third Century A.D. The Met describes this gallery as demonstrating changes in social and artistic trends that emerged during the later imperial period. Displayed in the gallery are marble sarcophagi, which replaced traditions of cremation and attest to a shift in culture. As I picked the relic up off of the floor its form became apparent, it spoke to that of the human figure. The relic, composed of two main features including a red round bead and an elongated jade-like bead, attached together with yellow string suggested the form of a head and torso. In this moment of finding a continuum of embodiment arose, encompassing the absent bodies that once rested in their sarcophagi, the figurative jewel, its previous owner, the visitors and myself. For the next 5 months I continued to search and scan the museum floors and collect relics, which I now sincerely think of as treasures.

I collected over 100 treasures from the museum, most of which are just a few centimeters wide including sequins, washers, beads, dust, earrings, buttons, and objects that are two abstract to be given names other than what seems to be their material makeup. I developed a cataloging system to preserve the order and safety of the objects by placing them into Ziploc Bags that were then labeled according to the week from which the treasures were found.

Currently I’m in the process of developing a photo book entitled Treasures from The Metropolitan Museum of Art. The treasures will be photographed digitally referencing the photographic strategies applied by the Met. Each object will receive its own page and will be ordered by implementing the cataloging system I developed based on chronology. Once the book is complete I will propose for its inclusion into the Metropolitan Museum’s Thomas J. Watson Library. I’ll also be sending a copy of the book to Hilton Als, a staff writer for the New Yorker and art critic, whom while visiting the Met (unknowingly to myself) created a photo series of female security guards, for which I am included and posted them on his blog.

Some of the treasures have also been digitized. With the prevalent practices of 3D scanning and photo digitalization of artworks across the world, it made since to incorporate this process into the collection. The creation of 3d scans, also permits the ability to digitally print replicas of the treasures made from bioplastic using a 3D printer.

Through these gestures I intend to preserve and present the treasures in the most pristine way. These small artifacts of human existence found within the Met attest to the histories formed between life, art and the institution. The collection illuminates sets of constructed hierarchal functions within the museum, including the social standing and significance given to security guards along with the material relationships found between the treasures and the Met’s permanent collection.