WORKS > Guides from the night fields 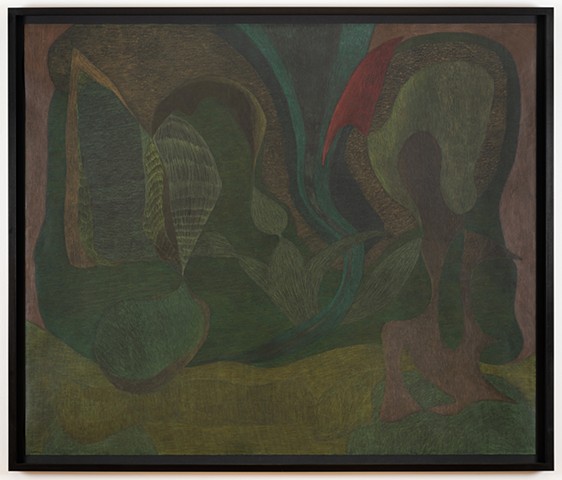 To the underground
colored pencil on paper
42 x 50 in. 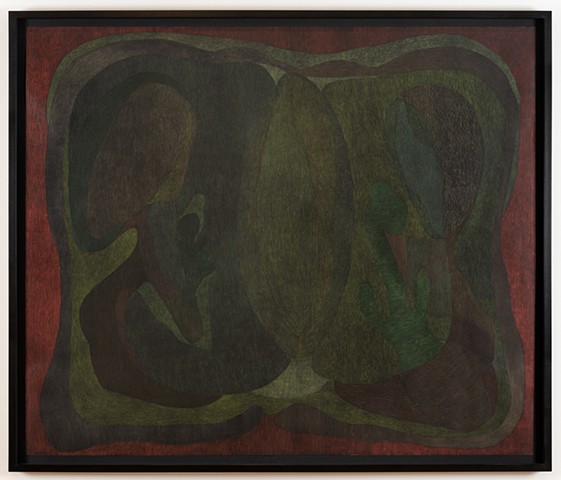 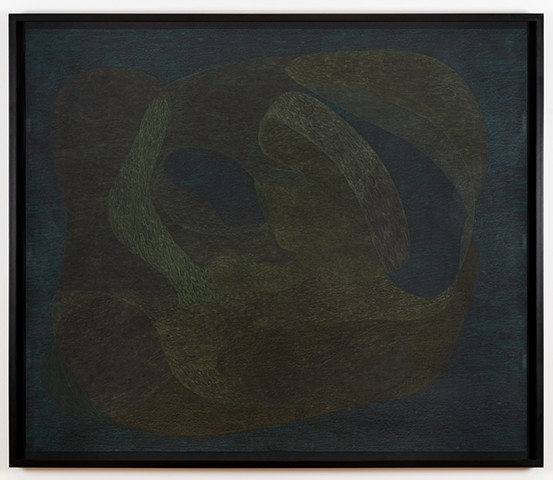 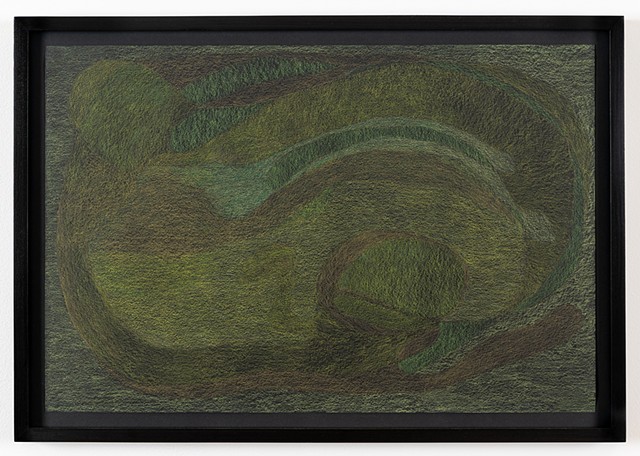 Through the waves
colored pencil on paper
12 x 18 in. 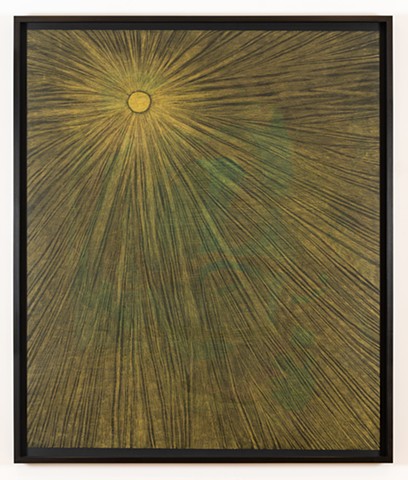 Below the light
colored pencil on paper
50 x 42 in. 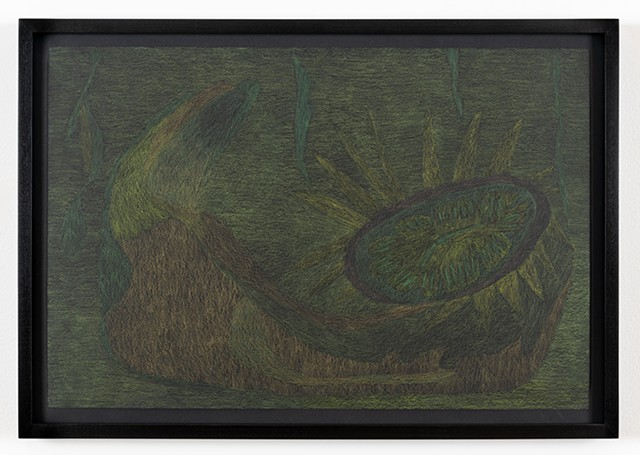 Into the flower
colored pencil on paper
12 x 18 in. 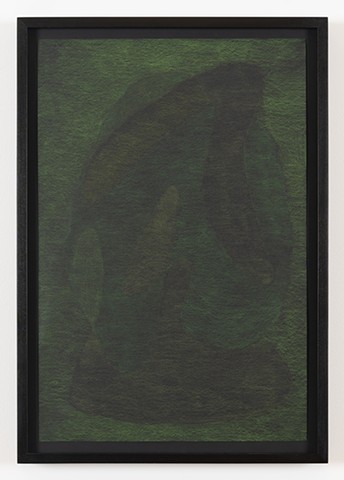 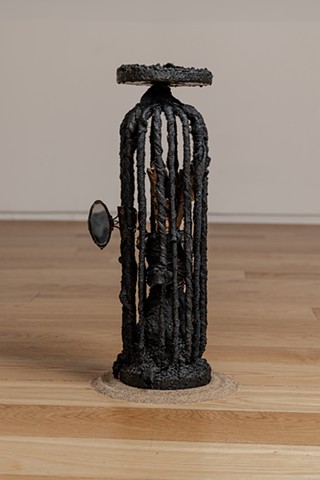 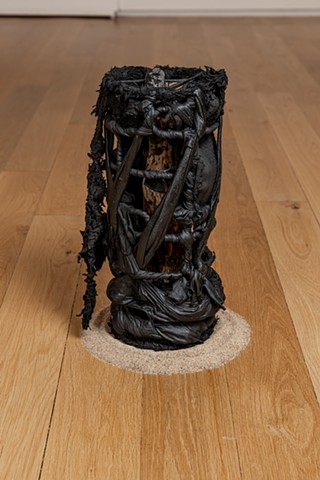 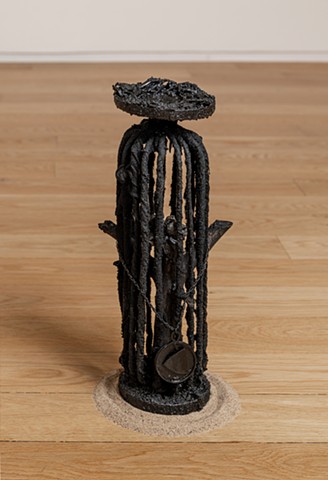 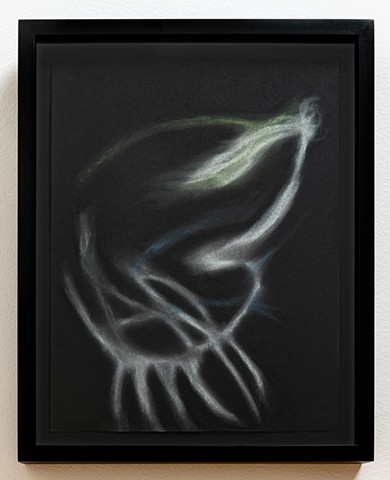 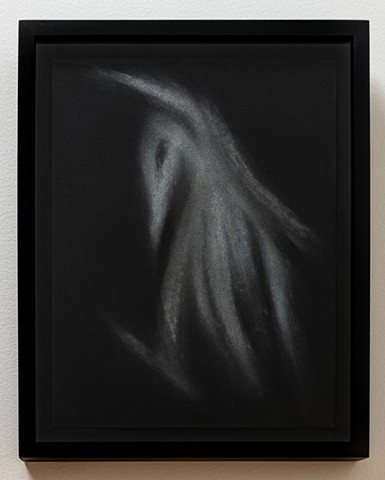 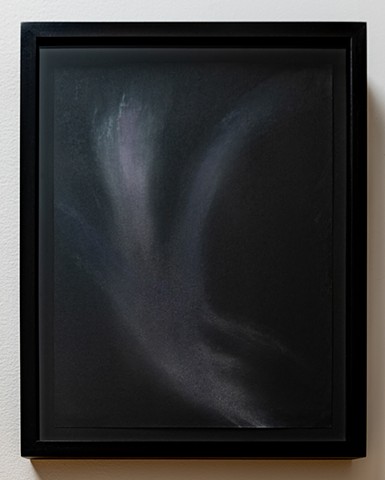 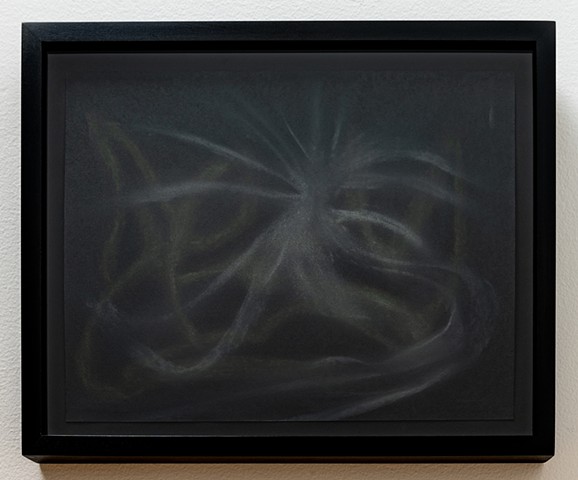 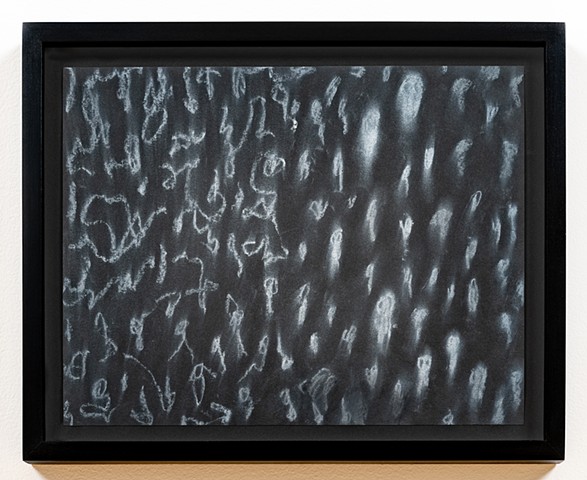 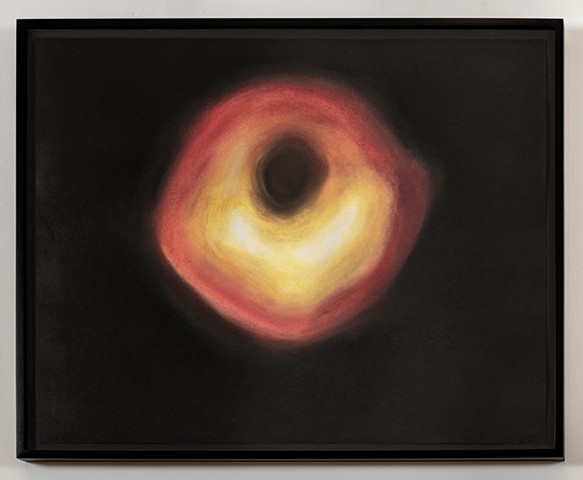 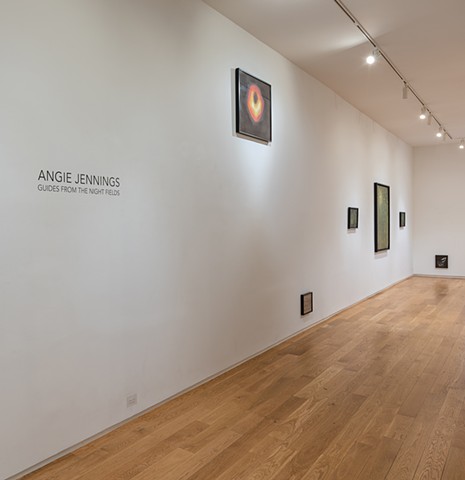 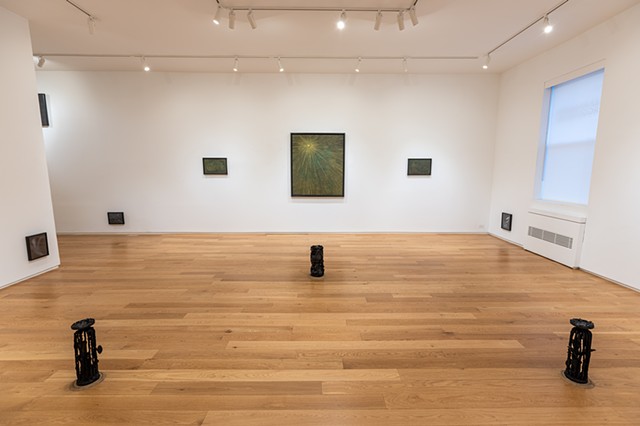 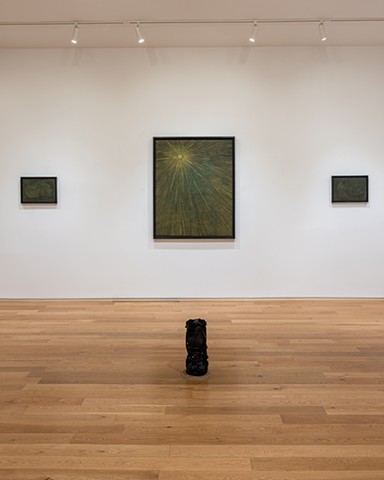 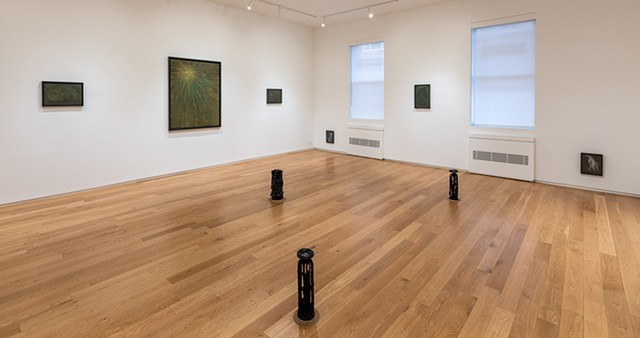 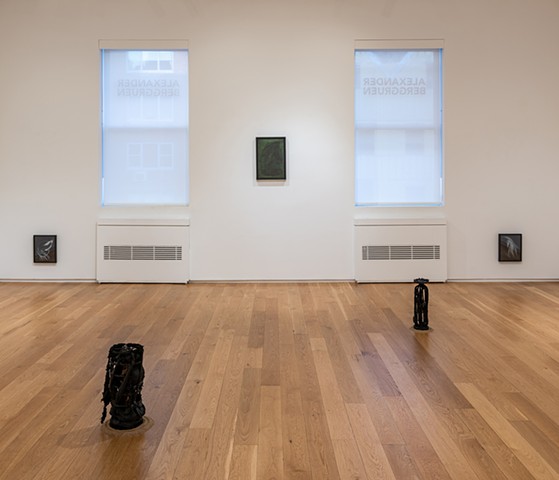 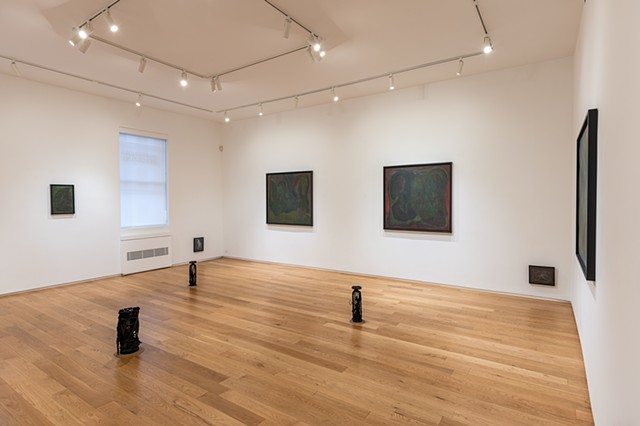 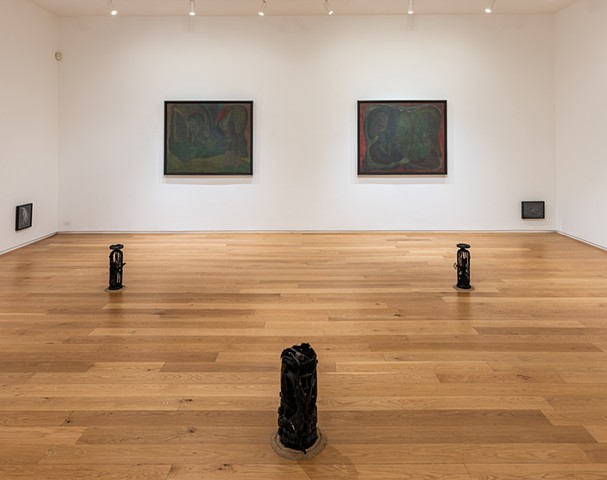 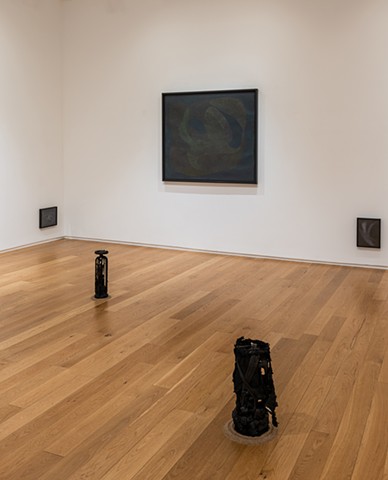 Alexander Berggruen is pleased to present Angie Jennings: Guides from the night fields. This exhibition will run at the gallery: 1018 Madison Ave., Fl. 3, New York, NY, 10075.

Guides from the night fields presents visionary plains existing just beyond sight. Here the word guide is akin to spirit, and we see the artist’s continued developments speaking towards issues of visibility and the formation of speculative thought. Jennings explores the limits and structures of our visible spectrums in relation to identity and the unknown through her emanant drawings on black paper. In speaking about the drawings in the show,

Jennings stated: I’m developing what I imagine to be spaces of escape and refuge that exist within a field of vision that we have yet to gain access to, a world where existence has the ability to transcend identity.

Biomorphic forms compose tranquil spheres providing relief from loss. Multiple psychogeographic threads motivate the artist through reflecting upon traversing cities and fields while growing up in Minnesota, and contemplating racial violence including the murder of George Floyd and Daunte Wright along with others in MN and across the states. Jennings questions ways in which one navigates space and relates these conditions to the publications of the Negro Motorist Green Book, first published in 1936 by Victor Green as a precautionary guide listing safe routes and establishments for Black travelers. Interweaving these histories, Jennings offers paths that allow one to perceive unknown spaces of freedom.

Her gravitation towards an expansive green palette can be understood, not only as in reference to the Green Book, but also in relationship to new growth, fertility, and rebirth. In the artist’s 2021 To the Underground, fluctuating earth-toned lines comprise a terrain of organic shapes, as one can almost perceive roads, bodies of water, plant-like forms, and birdlike figures. The elusive new growth depicted in the artist’s organic forms offers a hopeful calm and reprieve. In reimagining space, ties to Afrofuturism can be found, and may be connected to a lineage of iconic artists such as Sun Ra and Octavia Butler who also sought and generated vast cosmic worlds.

Many of the forms found on paper are also tethered to the history of biomorphic abstraction including artists such as Joan Miró, Jean Arp, and Henry Moore. Jennings interrogates the overlooked influences of African and other forms of “primitive” art employed by the early “masters” of abstraction, modernism, and primitivism by creating her own bocio sculptures. Bocio, often formed through cords and binding, are traditionally anthropomorphic African Vodun sculptures, dating at least to 1725 when recorded along the historically named “Slave Coast” of West Africa, and represent a myriad of protective and spiritual purposes. (1) Mirrors affixed to bocio have been cited to represent a prophecy “both in ‘seeing’ danger and in ‘turning it back.’” (1) In the artist’s rendition, mirrors can be found surveilling those entering the space, and are rendered more obscure, similar to her works on paper. Jennings’s bocio sculptures also function as a contemporary gesture of reclamation, situated with the long-standing history of looted African art and artifacts. Through these works, the artist touches upon histories of colonization and it's lingering states.

Further oscillations are found through the cultivation of a resonating installation, allowing distinct dimensions to emerge, emphasized by the various planes in which the drawings and sculptures reside upon the gallery floors and walls. The artist’s chalk pastel Unnamed Spirit Drawings are placed low on the walls, level with the sculptures, perhaps functioning as metaphysical extensions of the bocio. Additionally, Jennings’s ethereal investigations continue with her 2021 drawing Blackhole. Here, she references the first photograph of a black hole while ruminating on the process of, in her words, “making visible what was once invisible”, which speaks towards states of otherness, specifically the circumstance of being seen and not.

Existing in this interstitial space, Jennings offers a clearance for bodies to circumvent the boundaries often imposed by identity. The multifaceted works employ and lift veils, obstructing direct interpretation while concurrently leading a viewer into divinely-shielded locations of liminality. Resisting or blocking direct interpretation, Jennings’s works thrive in the spaces between the seen and the unseen, raising questions about how the obscure can regenerate the power of visibility.